Would you like to learn a "little known secret" that could save you money, provide heaps of fun while improving your chances of catching fish?

Have you ever asked yourself, "Why do some fisherman come home with a feed of fish, while others spend hundreds of dollars at the tackle store buying the latest rod, reels, lures and fishing gadgets only to come home empty-handed?"

Do you suffer the following when fishing?

Don't give up. This page will provide you a process that will make all the difference to your fishing!

There's one thing, successful fishermen never want you to know, it's their "Secret Recipe To Catching Fish"

If you're like many others, you've spent loads of money buying lures that didn't help you catch a single lousy fish.

You kick yourself for being so stupid. You knew when you were watching that YouTube video, promising that this lure would catch you a feed, that the sales pitch was too good to be true.

But just like the last time, you rushed off to the tackle store., handed over your cash, only to find out that after another long session of catching nothing, you are left wondering why others can catch fish, but you can't.

But as you stand there on the beach, watching another fellow catching one fish after another. You ask yourself, "Why is he catching fish when you are catching no more than a cold?

Finally, you summon the courage to ask the bloke next to you his secret for catching fish.

That bloke's name is Roger Osborne. For the past 40 years, Roger had perfected the art of catching fish by applying a secret recipe his father taught him when he was only a boy. I'll let Roger tell the story...

"When I was ten years old, my father Bryan began to take me down to the beach. My Dad was taught to catch fish off the beach by a mate of his named Sonny Swan," said Roger.

"Dad's mate Sonny had shared with him a secret recipe for catching fish that has made all the difference.

"Dad never needed to fish with lures. Sonny had shown him how to fish with the ultimate bait. That's right, the simple beach worm.

"Years later, often when I would go fishing, strangers fishing near me would ask me why I was catching so many fish.

"Even my mates were amazed at the results I was getting with my secret fishing recipe of adding a humble beach worm to my hook.

"What people don't realise is that many fish love live beach worms. It is in their DNA to head for a beach worm when looking for a feed.

"The real challenge is how you catch the beach worm. Which is what you need to know if you want to come home with a feed of fish." 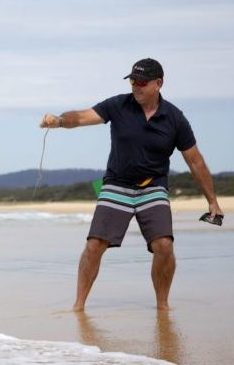 Can anyone learn to catch a beach worm?

Yes, anyone, any age, can catch beach worms with the right understanding and technique.

Unfortunately, most people walk away after several hours without a single solitary worm becasue they have only have part understanding as to how beach worms should be caught..

Beach worming is an art. It involves finesse. There are many subtle things that a good beach wormer does instinctively.

Like all good things, you need to know the technique step-by-step. How you learn those steps is why Roger has had this page created.

Roger created Beachworming.com.au as he has a  desire to help people, and provide them with quality instruction that works each time you head down to the beach.

After doing some research, Roger  found that there was no really accurate teaching out there on this subject. There are a few videos on You Tube which lack most of the vital information needed, and there is not much written in fishing books.

Finally, at the prompting of many fishing friends he had helped, he decided to formalise the process so that anglers around Australia could enjoy the benefits of cathing fish once they had the knowledhedge of how to catch a beach worm.

Just recently, Roger had it confirmed that it is possible to teach anybody how to catch beach worms, even a teenager.

Roger took a phone call from Matt Potter, who not only wanted to learn how to catch worms but wanted his teenage daughters to learn as well.

Not sure how the challenge would go, Roger agreed to meet with Matt and his daughters at a local beach.

"At first, I was hesitant. Teenagers at the best of times can have short attention spans, so I knew I had to teach them quickly before they became bored," said Roger.

"In a matter of minutes, Matt's daughter caught her first worm. Matt and his daughter were high-fiving each other.

"It was really exciting. To see the smiles on their faces, it makes teaching beaching worming rewarding.

"It made me realise that day how much fun you can have beach worming.

"It also confirmed that I need to make these lessons available to people I couldn't teach in person. 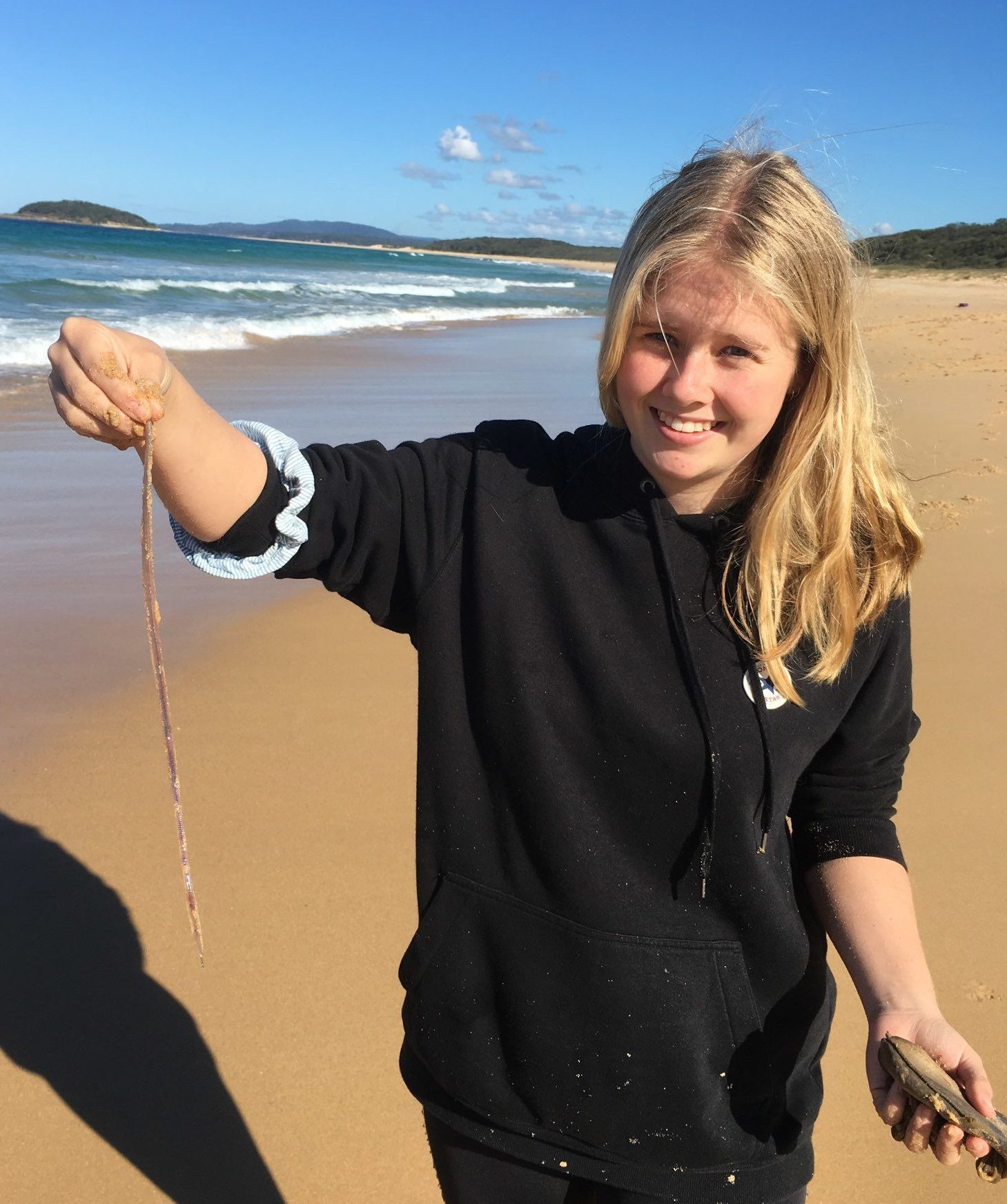 What did Matt Potter think about Rogers lesson?

"Catching beach worms by hand with my daughters had been on the bucket list," said Matt.

"Roger was such a patient, talented and passionate teacher who shared his years of experience to have us all catching worms in our first session.

"Being able to use live beach worms to fish has allowed our family to successfully catch a lot more fish. Thanks Roger."

Since Matt Potter sent that testimonial, last week he contacted Roger to share that on every fishing trip to the beach they are still catching beach worms.

Not only that, using beach worms as bait has has vastly improved their success with catching fish.

This Online Course will give you a simple process that has been proven to help the average angler catch beach worms while saving money! 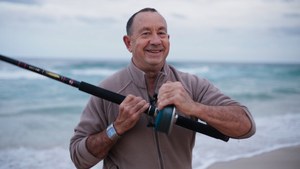 Beach worms have to be one of the best and most consistent baits for beach and estuary fishing.

Want to catch your own fresh beach worm bait but have no one to teach you exactly how to do it?

Allow me to impart the knowledge that I have learned from more than 40 years of catching beach worms!

For less than the cost of 16 beach worms - you can begin learning to be a beach wormer and have this wonderful skill for life!

Watch and learn as I show you everything I know about beach worming.

Did you know these fishy facts:

How to find Beach Worms

How to catch Beach Worms 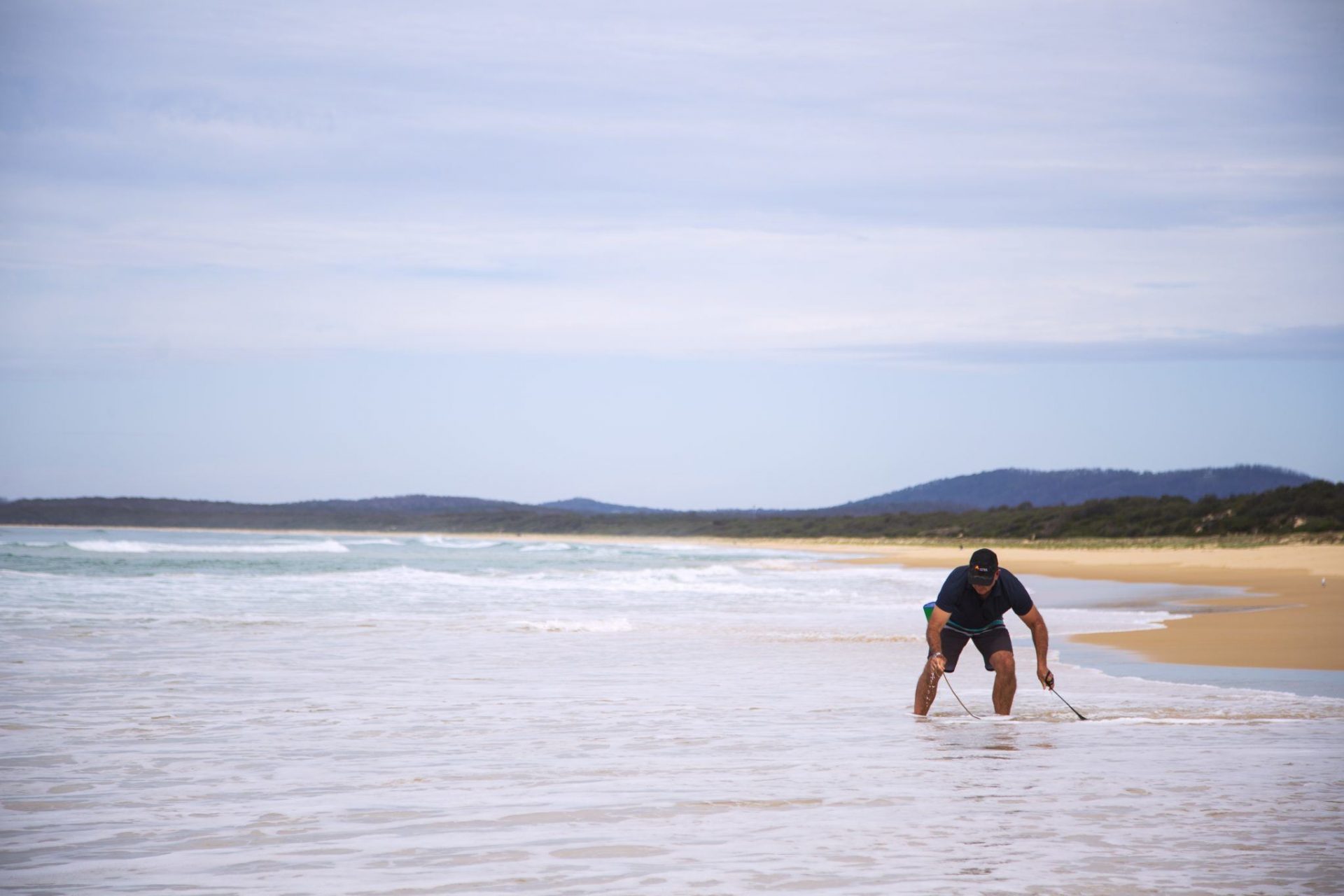 Essentially, my three part Video Masterclass Series is my book on location at the beach in video form.

Every lesson is covered from start to finish, showing you exactly what I do.

My goal has been to create something excellent, with the whole purpose being to get you catching beach worms as easily and quickly as possible.

I have spent many (enjoyable) hours at the beach filming each part in detail to make it easy for you to learn.

Beach fishing is very family friendly. You can go fishing with your mates, or you can take your wife and kids down to the beach for some healthy outdoor activity, and catch a feed as well.

How has Roger's Beach Worm MasterClass improved the success anglers are having?

I now catch beach worms using the same method as described by Roger.

My success catch rate went from 10 percent to around 85-90 percent!

I followed the principles in the video series many thanks to Roger."... 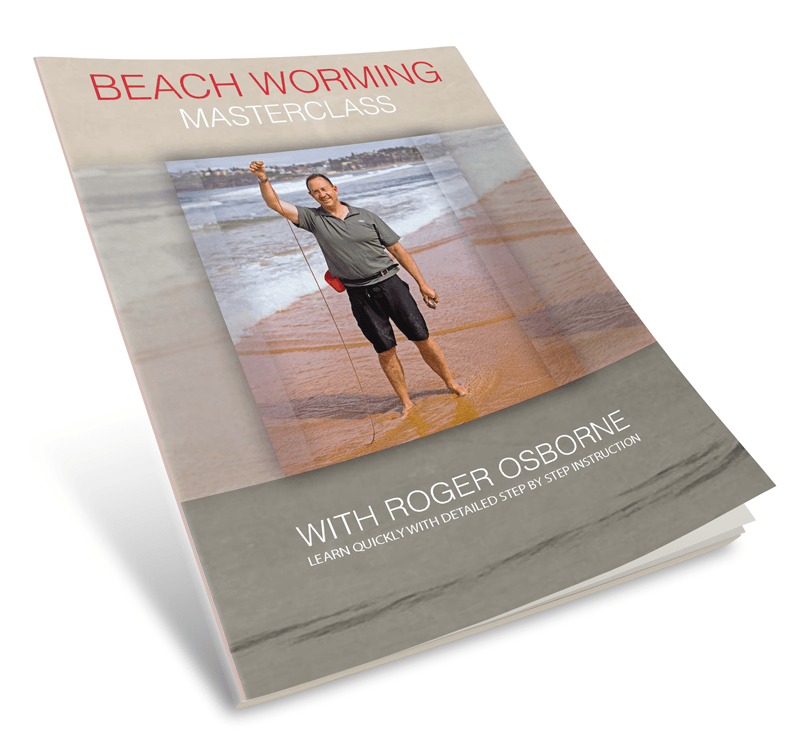 Roger has spent many months distilling his 40 years of beach worming knowledge into a detailed guide. This 50 page book simplifies the art of catching beach worms into a straight forward follow the dots process.

Over the years Roger has  taught many people to catch beach
worms and has had many people ask me to teach them. He even
taught my wife to be a good beach wormer.

He knows the frustrations that a lot of people have in trying
to catch beach worms. He even knows some great fishermen who have just not been able to master the art of beach worming but would love to learn how.

Beach worming is difficult because it’s not something that
you can just walk up and do. It is not possible to walk down
to the beach and just pull a worm out of the sand. It takes
knowledge and skill.

Roger believes that all a person needs is a good teacher,
someone to clearly explain in detail how to catch beach
worms. He decided to write this book because he has a
passion for helping other fishermen experience the joy and
satisfaction of catching their own beach worms.

Sometimes in this book you may think that he is stating
the obvious, however, he wants to make sure that he explains
every step precisely so that you don’t miss anything that is
important. 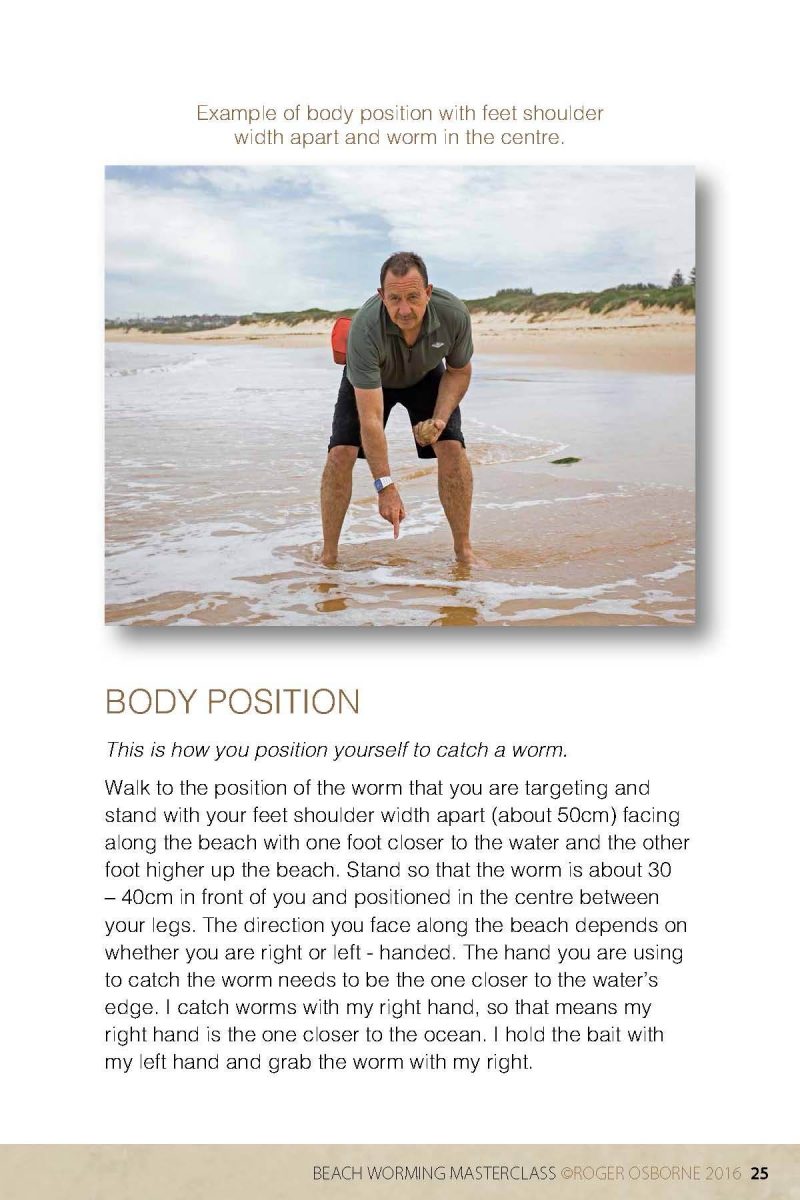 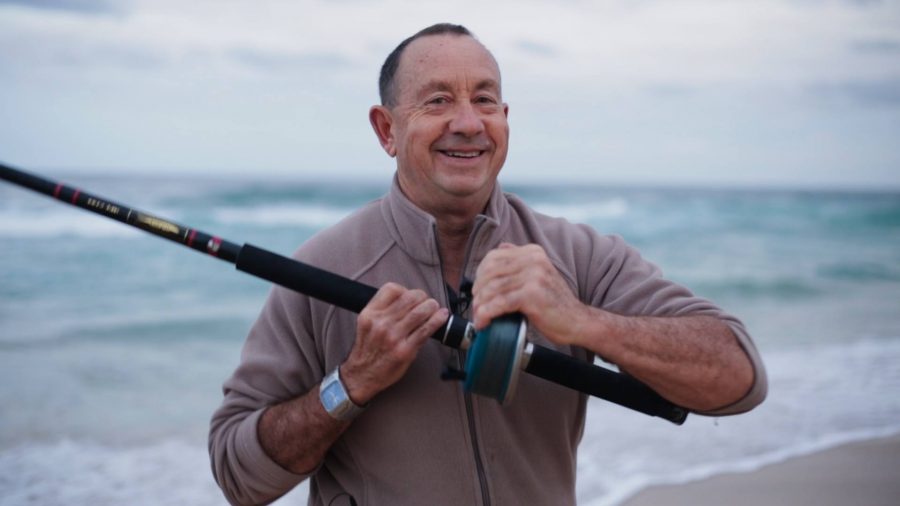 Let's summarise what you will gain from the Beach Worm MasterClass I am so confident that you are going to love the Beach Worming Masterclass and the training that I am providing.

That if in the next 90 days for ANY reason you are not completely satisfied that my training can lead you to be a successful beach wormer, I will immediately refund the entire cost - No questions asked!

​Roger's clear and easy to understand lessons will show you exactly how to catch Beach Worms!