Is There a Right Time to Make a Sales Call? 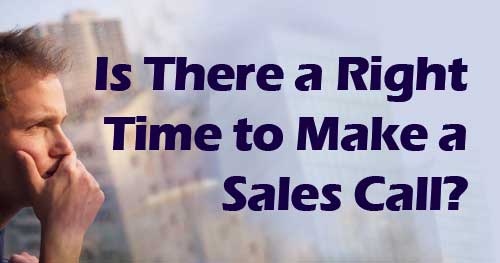 At my last sales workshop, I was asked whether there was a right or wrong time to make a cold call. Since then I've had several thoughts about this topic and if my experience from yesterday is anything to go by, hopefully this article will shed some further light on the subject.

Yesterday was one of those days when all my plans seemed to fall in a heap.?By 5.00pm I realised that I had not made enough appointments for the next two days.?Not wanting to waste a minute and miss out on an appointment, I shut down my e-mail program, quickly put together a list of potential prospects and started to cold call.

By 6.00pm I had made five new appointments, but then it dawned upon me that maybe I should stop phoning as it was getting late.

What happened next gave me the answer to the question.

Even though part of me felt it may be getting a little late to phone?people. Maybe these people had finished work and were now heading home in did not want to talk about business any more. I started having thoughts that they would be irritated by my intrusion.

Not sure what to do, I decided that I would telephone them and once I had them on the line, I would ask them: "Do you have a moment to speak?"

That way if I caught them at?an inconvenient time, they could let me know they were busy and I would call back.

Where normally, if making these types of calls in the middle of the day, once I had the decision maker on the phone I would simply go into my normal cold calling?routine where I would?set up an appointment to do my online presentation.

What was the result?

By eight o'clock I finally put down the phone having made nine appointments.

The last phonecall at 7:48 PM resulted in me doing an online presentation for 45 minutes with the?prospect organising a second presentation for?his business partner in the morning.?My conversation with the last prospect would have gone on longer only for the fact that he?realised he was?now half an hour late for another appointment. But in saying that, he made it quite clear that he was delighted I had called and felt there was a good chance?of doing some business together.

Looking back on last night, I?quickly found out that after hours is a fantastic time to call a senior decision-making as they are not in meetings and with nobody else phoning them you get through immediately.

In each instance, I started the call by asking if they had a moment to speak and in each case they responded happily that they had some time to chat.

Normally if I ring during the middle of the day I have to deal with a series of gatekeepers. Then when I finally get through to the decision maker, in most cases they say they would like to organise an appointment but advise me that I should call back later?when they were not so busy.

Is There a Right Time to Make a Sales Call?

In general I would say no, as it purely depends on the person you are contacting.

I would suggest that if you calling after business hours you ask them do they have moment?to speak. Once they give you the all clear, you can start your cold calling pitch. They will stop you quick enough if they are not interested.

However, I have found that in the middle of the day around lunch time many decision-makers are not keen to take calls, especially if they're entertaining business clients over lunch.

Also I would imagine it depends on what the decision maker does for a living. If you are contacting a builder, depending on the time of day he may be on a work-site where it is impossible for?him to take a call. To contact a doctor you would have to catch them when they are not seeing patients.

But only you can answer that based on your own industry experience.

In closing, if in doubt pick up the telephone anyway, make the call, ask them if they have a moment to speak and you never know you might just phone?someone receptive to your pitch. If you don't make the call you will never know whether you just lost another opportunity.

I would love your feedback.?Share your thoughts?on Facebook or Linkedin?or make a comment below in our comments section.

Stick Like Glue – How to Create an Everlasting Bond with Your Customers So They Spend More, Stay Longer, and Refer More!

Kens Review - For the past four years I have been an avid viewer of Jim Palmer's weekly online Internet TV program titled "Newsletterguru tv"and his weekly podcast "Sticklike Glue Radio". Having benefited from many hours of Jim's golden pearls of wisdom I had to add this book? Stick Like Glue - to my library when he first released it. Jim is one of those authors who has experienced both the ups and downs of life and business. A two-time survivor of cancer and an entrepreneur that has faced failure to only turn it around into multiple numbers of successful businesses, this is one author that you should be following. His weekly online TV program is a quirky mix of solid sound business advice added to the backdrop of seeing Jim in his surroundings. We all knew when Jim had achieved his lifelong dream of owning a motor cruiser because week after week he filmed the TV program from the boat. But that did not matter, as over the past four years we have watched his journey as he struggled with the challenges of business and through sheer determination? came out on top. If you would like to benefit from the pearls of wisdom in this particular book, take the opportunity of buying a copy right now. This is one book you'll find hard to put down!